From BoofCV
Jump to navigationJump to search

2021-Oct: Recently Re-written! Please provide feedback on how understandable it is and report errors! Thanks!

BoofCV contains a toolbox and API for camera calibration with plenty of source code examples and pre-build GUI applications. Camera calibration (also known as camera resectioning) is the process of estimating intrinsic and/or extrinsic parameters. Intrinsic parameters deal with the camera's internal characteristics, such as, its focal length, skew, distortion, and image center. Extrinsic parameters describe its position and orientation in the world. Knowing intrinsic parameters is an essential first step for 3D computer vision, as it allows you to estimate the scene's structure in Euclidean space and removes lens distortion, which degrades accuracy. BoofCV provides fully automated calibration for several planar target types (see pictures above) that can be easily printed on standard sized paper.

Papers and How to Cite

If you use BoofCV in academic work please cite it so others can find out about it!

For multi-camera calibration, ECoCheck is the recommended target type since its a self-identifying pattern and due to the encoded binary patterns you can identify uniquely each landmark even when obstructed. For single camera calibration then either chessboard of ECoCheck can be used as they have symmetry counter acts shrinking caused by blur. The other target types will degrade in accuracy when there is any blur or under lens distortion. Unless you are very careful there will almost always be some blur from being out of focus or motion. This issue has been exaggerated as the resolutions of cameras has increased.

The first step to creating a calibration target is downloading or creating your own PDF then printing it. After printing you will need to mount the printed document on a rigid board, discussed in the next section

After printing, the target needs to be mounted on a rigid flat surface. Any warping will decrease calibration accuracy. An ideal surface will be rigid and smooth. Thick foam poster board is easily obtainable and works well. I've also used clipboards with some minor modifications. Cardboard is OK if high precision isn't required well. For a well made target and a decent camera reprojection error is typically around 0.1 pixels.

You should now do a quick test to make sure you did everything correctly and that the software can detect your new target. If you have never done camera calibration before this is also a good way to learn what you should not do when taking your photos for calibration. If you have a webcam installed on your compute this test is easy. To do the quick test simply launch the assisted camera calibration app, configure it for your target type, and see if detects the target.

Quick comment about target row/column specifications. How rows and columns in a target is counted isn't universally agreed upon. In BoofCV we always count the squares or circles. To help you the PDF generator will the target's name and characteristics in the lower left hand corner.

Camera models are provided for narrow (normal cameras, < 180 degrees FOV), and wide (no limit on FOV, a.k.a fisheye). Narrow camera models take in points that are in pixels

. Normalized image coordinates represent a 3D pointing vector with the implicit assumption that

, which is what limits the FOV. Wide camera models use spherical coordinates

instead since they do not make the assumption that visible points always appear in front of the camera.

If you use the calibration application you can decide if you want to save the found parameters in BoofCV and OpenCV formats. OpenCV is only provided for Brown as the other camera models are not identical between the two libraries.

This is the most basic camera model and does not model lens distortion.

The Brown camera model [1] is the most popular and models lens distortion radial and tangential ("decentering") distortion. It is appropriate for most lenses with a FOV less than 180 degrees.

are radial distortion coefficients, and

are the tangential coefficients. 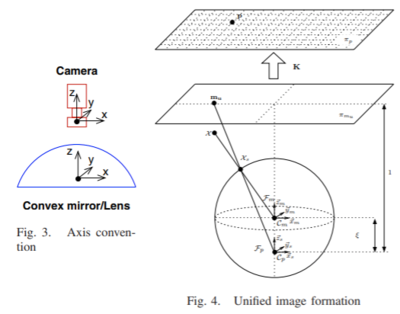 to the Brown model and can model parabola, hyperbola, ellipse, and plane mirror equations. The only difference from the Brown camera model is how it converts spherical coordinates into normalized image coordinates:

After this step it has identical equations to Brown.

Kannala-Brandt [3] is a wide camera model that supports perspective, stereographic, equidistance, equisolid angle, and orthogonal projection models. BoofCV's implementation is a bit unusual in that it supports the full camera model as presented in [3], with symmetric and asymmetric distortion terms. Most libraries just support the Radially symmetric.

are the distorted normalized image coordinates,

is a unit vector in radial direction, and

is a unit vector in tangential direction.

BoofCV comes with applications for camera calibrations which can be used as either commandline tools or GUI applications. The easiest way to use them is to launch the Applications jar then click on the calibration tool you wish to use. The commandline interface provide access to all the options and allow you to select images using Glob or Regex commands. For those who wish to use BoofCV to detect calibration landmarks but want another tool to do the actual calibration, you can save the landmarks detected for each image to a file. 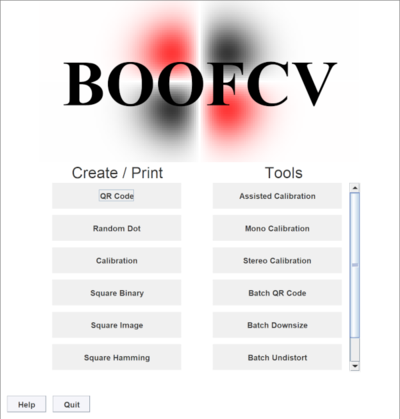 To launch the tools from the command line you can use the following about building/downloading "applications.jar".

BoofCV provides both command line tools and a GUI application for calibrating different types of cameras. A screenshot is shown below of the application. The application is designed to help you visually verify results quickly and accurately while also providing statistical results. Camera model parameters and target type can both be easily changed in the GUI. Bad features and images can also be removed so that they won't corrupt your results. The latest instruction for the command line tool can be found by typing "--Help" as a flag.

Both fisheye and regular cameras can be calibrated using the same application. Target type and camera model can both be changed. Bad features and images can be removed.

Screen shot of the stereo calibration application. Camera model and target type can be changed in the GUI. Contains tools to verify that recitification was done correctly. Landmarks and images can be removed.

The same applications can be used to calibrate from a set of previously collected images saved into a directory. By default a GUI visualizing the results is displayed, but this can be turned off.

BoofCV can read and write YAML camera calibration files in OpenCV's format. You can calibrate your camera in BoofCV using the assisted calibration app and then use its results in OpenCV!

Here's a list of other tools for camera calibration, in alphabetical order. If you know of other tools that should be listed here post the suggestion on the message board.