Below are two postscript documents of said calibration grids. When using the calibration example code below note how it specifies each pattern's size and the width of each squares. Both black and white squares are counted when specifying the target's grid size. If you are using the provided calibration grids, then no changes are needed. However, if you wish to use your own targets then you will need to tell the software about the new grids characteristics.

The target needs to be mounted on a flat surface and any warping will decrease calibration accuracy. An ideal surface will be rigid and smooth, for example a table, glass, or marble tile. Cardboard or foam will still work well, but has a tendency to warp over time. Having said that, don't go overboard trying to make a perfectly smooth surface 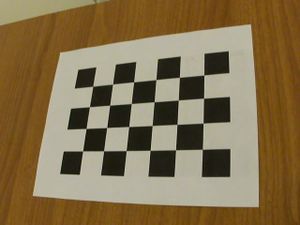 A quick note on cheap webcams. Some webcams can apparently change focus without changing their focal length. A zoom lens will always change the focal length when at a different zoom. The easiest way to know if autofocus will change your focal length is to put it in manual mode and calibrate at different focus values.

Taking a diverse set of in focus image is essential to calibration. Images should be taken at several different orientations, distances, and locations in the image, while filling up as much of the image as possible. Be sure that the calibration target appears along the image edge and the center. If all the pictures are taken in one region then the results will be biased, even if the residual error is low. The whole target needs to be visible in the image and in some cases the target's border also needs to be visible. Also avoid extreme angles or distances when taking photos. Images used in BoofCV's examples can be found in the BoofCV-Data git repository: https://github.com/lessthanoptimal/BoofCV-Data/tree/master/evaluation/calibration.